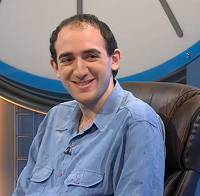 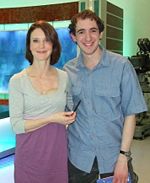 Neil Zussman with Susie Dent during his original run in 2009.

Neil Zussman was an octochamp from Series 60 and a quarter-finalist in the 30th Birthday Championship.

Zussman started off with a win over Kate Richardson and followed it up with a thrashing of Kevin Pidduck. The next game was of a very high standard, with Zussman leading 101 – 94 going into the crucial conundrum. However, he avoided losing with a century by buzzing in after half a second with HAMBURGER. His next game was just as dramatic, as professional DJ Simon Greening came back from 20 points behind in the last two rounds before Zussman again scraped through on a second conundrum. His next two games featured scores of 101 and 108 before dropping down to 81 although this time it wasn't a crucial conundrum. He finished his run with 97.

Zussman was the first ever octochamp under Jeff Stelling and Rachel Riley.

He returned to the finals as No.5 seed, where he defeated the No.4 seed Shane Roberts in the quarters, before meeting No.1 seed Kirk Bevins the following day. After Bevins found SUBSPACE in an early letters game, Zussman pulled the game back level with POLITEST, and with the two players remaining evenly matched upto the conundrum, Bevins solved the conundrum AMSPECIAL in half a second, ending Zussman's run.

Zussman appeared on Countdown again on 30 March 2011, where he was the audience member who solved the conundrum after it defeated both contestants.

He returned to Countdown in 2013, as one of 41 contestants taking part in the 30th Birthday Championship. After receiving a bye to the first round, he won his first match against Series 65 semi-finalist Paul Keane by a score of 99 – 81. He then beat Series 44 semi-finalist Dave Hoskisson in round 2. He finally succumbed to the Series 66 runner-up Jonathan Rawlinson, who dropped only 1 point during the whole match.

On 8 October 2012, he appeared on Only Connect with James Hall.

* includes ten points from a tie-break conundrum
Retrieved from "https://wiki.apterous.org/Neil_Zussman"
Categories: Contestants in Series 60 | Contestants in 30th Birthday Championship | Teapot owners | Octochamps of the 15 round era | Finalists | Contestants on other game shows