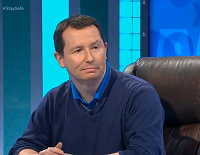 Paul Keane was an octochamp and semi-finalist who made his debut on 10 November 2011, toward the end of Series 65 (thus also becoming the last octochamp of the Jeff Stelling era). He racked up eight preliminary victories, showing particular skill on conundrums, which he often solved in 1 second or less. Keane was the only Series 65 octochamp to not face any crucial conundrums during his run.

He returned as #3 seed for the finals in December. The nine MODERNISE and other good words helped him to a 96 – 78 defeat of Dave Taylor in the quarter-finals. In the semis, Keane continued to hold up well against Graeme Cole, but Cole ultimately overtook him near the end, and he went down 96 – 71 in a game closer than the scoreline suggests.

He returned to Countdown in 2013, as one of 41 contestants taking part in the 30th Birthday Championship. After receiving a bye to the first round, he lost his only match to Series 60 semi-finalist Neil Zussman by a score of 99 – 81.

Retrieved from "https://wiki.apterous.org/Paul_Keane"
Categories: Contestants in Series 65 | Contestants in 30th Birthday Championship | Teapot owners | Octochamps of the 15 round era | Finalists