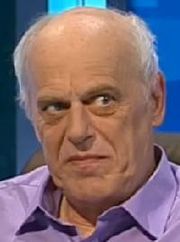 Dave Taylor was an octochamp in Series 65. He has also appeared on a winning Eggheads team, as well as appearing on Mastermind and Only Connect.

He returned to the studio in 2012 for a special episode against Peter Lee, in which Lee scored the highest winning score in a special game, with 132 points.

Retrieved from "https://wiki.apterous.org/Dave_Taylor"
Categories: Contestants in Series 65 | Teapot owners | Octochamps of the 15 round era | Contestants on other game shows | Finalists