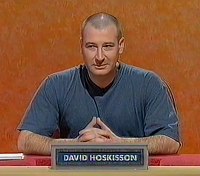 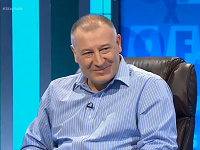 ...and 12 years later in the 30th Birthday Championship!

David "Dave" Hoskisson was a finalist in Series 44, and a participant in the 30th Birthday Championship. He was an IT project manager from Liverpool, Merseyside.

He returned to Countdown in 2013, as one of 41 contestants taking part in the 30th Birthday Championship. After receiving a bye to the first round, he won his first match against Series 13 semi-finalist Mike Whiteoak by a score of 85 – 81. He then lost to Series 60 semi-finalist Neil Zussman on a crucial conundrum in round 2.

* includes 10 points from a tie-break conundrum
Retrieved from "https://wiki.apterous.org/index.php?title=Dave_Hoskisson&oldid=148439"
Categories: