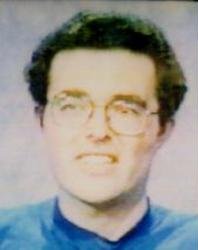 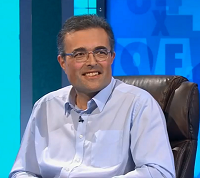 ...and 15 years later in the 30th Birthday Championship!

John Ashmore was the Series 38 champion. He was a 40-year-old payroll clerk from Great Yarmouth.

He first appeared on Countdown on 7 April 1998, beating Alan Atkins 50 – 40 in the 57th heat of Series 38. He won 3 more games before losing at the hands of Peter Malone. However, his four wins were sufficient to see him return for the final rounds as #5 seed.

In the quarter-finals, he beat Gerry Pearce after a sudden death conundrum, and beat #1 seed Chris Toyne the very next day in the semi-final. In the final against Steve Fisher, Ashmore led by 2 points going into the crucial conundrum. ENTRCHAMP appeared on the conundrum board, and within 4 seconds, Ashmore had buzzed, correctly answering PARCHMENT to win the game 91 – 79, and become the 38th champion of Countdown. Ashmore returned at the end of 1999 for Championship of Champions X, but was defeated in the first round by Terry Knowles.

Ashmore returned to the Countdown studios on 18 March 2003, to film a special episode rematch of his final against Steve Fisher, but the game has not yet been broadcast.

He returned to Countdown in 2013, as one of 41 contestants taking part in the 30th Birthday Championship. After receiving a bye to the first round, he lost his only match against the Series 60 champion Kirk Bevins by a score of 130 – 92, which was also the second 15-round max game in the show's history.

He is also a competitive Scrabble player, and is married to former Countdown contestant Anne Hidden.

* includes 10 points from a tie-break conundrum
Retrieved from "https://wiki.apterous.org/index.php?title=John_Ashmore&oldid=133605"
Categories: