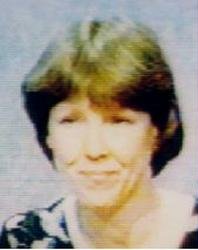 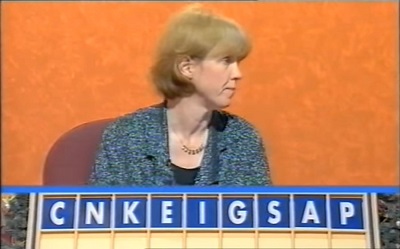 Ogilvie declares SPEAKING in the Championship of Champions X final.

Kate Ogilvie was an octochamp in and the champion of Series 39, as well as the runner-up of Championship of Champions X and the winner of the Ladies' Championship. She is currently the only female xicount.

A teaching assistant from near Edinburgh, but currently working at Whitcliffe Mount School, Cleckheaton, West Yorkshire, she first appeared on the show on 11 September 1998, beating Neil Doherty 48 – 42 in a hard-fought game. She won a further 7 games to become an octochamp, facing only two crucial Conundrums in the heats, and returned for the series finals as #2 seed. After beating Pat Peacock on a crucial conundrum in her quarter-final, and then defeating Andrew Lucas in her semi-final, she took on Richard Saldanha, brother of the famous Allan Saldanha in the grand final on Christmas Day 1998. The final was a close-run affair, with Kate leading by two points going into the crucial conundrum. However, neither player was able to unscramble YULETIDER in the 30 seconds, meaning that Kate became the 39th champion of Countdown - only the fifth ever female series winner and to date, the only woman to win a series unbeaten.

As the first octochamp of Series 39, Ogilvie was the first-ever finalist to be seeded above someone who had amassed more points than she had (excluding some erratic cases in Series 2). In the previous series, the production team had changed the seeding system such that win count took precedence over point count; however, Series 38's finalists were all in descending order of point count anyway.

She returned to Countdown in December 1999 for Championship of Champions X, where she was given a bye into the semi-finals on account of her undefeated status. After beating Terence English, she faced Scott Mearns in the final, and was outclassed by the young champion, losing 82 – 56. Kate would later be invited back twice to the Countdown studios, the first time to record a special game, a rematch of her final against Richard Saldanha, which she again won, and secondly to film the 'Ladies' championship' in Series 49, where she beat Verity Joubert and Hilary Hopper to win the 3-day mini-series.

Prior to her time on Countdown, she had previously appeared on Fifteen-to-One in April 1998, coming runner-up in her episode to another previous Countdown finalist, Amy Godel.