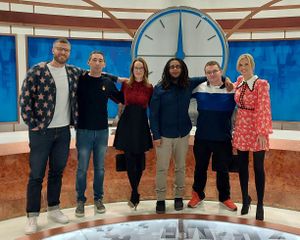 A shot before the Championship Final.

Championship of Champions XVI ran for three weeks between 2 and 20 January 2023 before the start of Series 87, and the first CoC to be presented by Colin Murray. The championship was scheduled a year later than usual, possibly due to the extended Series 82 being delayed by the 2020 COVID-19 hiatus.

The tournament encompassed sixteen finalists from Series 79 to 86 inclusive; with a span of eight series, this is the largest catchment area of any CoC to date. This was also the first since the 13th CoC from 2009 to invite back finalists from the latest series. A record 7 series winners took part; all but one of these entered with an unbeaten record of 11 wins out of 11, the only exception being Dinos Sfyris who debuted in Series 57 with 3 wins. Also for the first time ever, members of the 1,000 club took part: namely Elliott Mellor, Luke Johnson-Davies and the single-game record holder Tom Stevenson. Series 79 winner Mike Daysley was absent, while Luke Boynton had moved on from Countdown since finishing runner-up in Series 83 and also didn't take part. Other notable absentees included Series 81 runner-up Jamie Wing and semi-finalist Paul Nixon, Series 80 semi-finalist Brendan Whitehurst and Series 83 semi-finalist James Burley.

In a surprise Countdown first seen in the 5th preliminary match between Tom Stevenson and Adam Latchford, the host and dictionary corner guest swapped roles, for one round only; specifically, Richard Osman was the host for the letters game played after the first commercial break, in reference to the Teatime Teaser TRANSFER, while Murray occupied the guest role in the corner for that round. They returned to their roles from Round 6 onwards.

Series 84 champion Ahmed Mohamed emerged victorious against Series 81 champion James Haughton in the final. The two finalists were unbeaten, meaning that someone would emerge from this CoC an undefeated Grand Slam winner, which Mohamed obtained. The tournament was also noted for its difficult conundrums, with only 6 of the 15 in this tournament being solved at all. Amazingly, half of these came from Mohamed, and all three of them were the only ones solved after the 1st-round preliminaries.