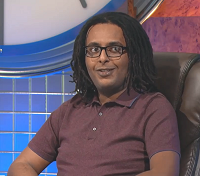 Ahmed Mohamed was an octochamp in and the champion of Series 84, and the champion of the Championship of Champions XVI. He was a Sports Steward (in between jobs) from North London. He is also a long-time Apterite, who was previously on Apterous under the pseudonym James Nguyen. He is also one of the most talented contestants to appear on the show, due to his brilliant word knowledge, lightning-speed conundrum spots, and unshakeable demeanour under pressure.

Mohamed made his debut on 29 September 2021, winning a score of 111 against four-time winner Daaniyal Ali. Mohamed went on to run off with seven more wins, all with scores above 100 including a top score of 138, although he survived a crucial conundrum against Co:Man2020 attendee Richard Williams in his sixth match. In three of his matches, he solved the conundrum in under a second. Along the way, he attained 927 points – the highest total which has involved at least one crucial conundrum – to place first in the seed table. He is also the 25th member of the 900 club.

Clips of his eighth game featured on Celebrity Gogglebox on 15 October 2021.

Mohamed returned for the first quarter-final on 15 December against five-game winner Janet Noe, where three nines helped him finish with a personal best of 143 points, although an unsolved and difficult conundrum denied him the chance to break Elliott Mellor's record of 152 points by just one point. Mohamed then played against Jeremy Slaney in the semi-final, picking out both available nine-letter words to eke out a commanding lead early on; although Slaney went on to beat him in two games during the third "half", Mohamed maintained his lead and finished by unraveling the conundrum COLICPITA to OCCIPITAL with half a second to spare, scoring 118 points and booking a grand final berth, where he faced Florence Cappleman-Lynes.

In the final, he took an early lead, but Florence made a comeback by beating him in the third numbers round. Mohamed though confirmed his win in the last letters round with PAGUROID and solved the conundrum by unscrambling IPAARTIED to TEPIDARIA in under two seconds to deny Florence a 100% record on them. He thus won the Grand Final with 114 points out of 125 and amassed an overall total across his 11 games of 1,302 points. He was not filmed lifting the Richard Whiteley Memorial Trophy.

Mohamed returned to the programme in January 2023 for Championship of Champions XVI where his first opponent was Edward Byrne. A scintillating performance with spots like VANITASES, GEEGAWS and MABATI meant Ahmed raced through to the quarter-finals, secured his twelfth century and his joint-third highest score, although Byrne did solve the conundrum as a consolation.

Luke Johnson-Davies lay in waiting for a hotly anticipated quarter-final matchup, and both players got off to a flier with consecutive 9-letter words. But then Ahmed put his foot on the accelerator, beating Luke in two numbers rounds and by maxing every letters game with the beaters being AMBREINE and JUDOIST. The only time he didn't score was in a dead-rubber last numbers game which Luke solved, and Mohamed capped off his victory by spotting NICOTIANA from OATNIACIN to secure progression to a semi-final against fellow unbeaten player Dan Byrom.

In the semi-final, Dan and Ahmed scored in all of the first 14 rounds, which was only the second time it had ever happened in the 15-round format. In addition, every round except Round 10 was maxed, with the darrenic ANTERNES eluding both players. But Mohamed ultimately came out on top by turning ALLPOTPIE into POPLITEAL in under 2 seconds, securing progression to the grand final against James Haughton after one of, if not the greatest ever 15-round game.

In the grand-final, Ahmed was presented with his toughest challenge, as despite taking an early lead through WANDERER, Haughton created his own big advantage thanks to BRAVURA, ABATISED and an excellent as-close-as solution to an impossible 4L numbers game. Mohamed though dug deep by spotting the brilliant MAGILUS to put himself back into shooting range, and ultimately the match went into a championship-clinching crucial conundrum. Ahmed buzzed in first with PULSATILE, which was right, meaning that despite scoring his lowest total to date, he remained unbeaten with a Grand Slam, claimed the CoC title, and certified himself as one of the most successful Countdowners to appear on screen. His final points total was 1775, which equated to roughly 118.3 per game.

Mohamed appeared on ZoomDown Series 4 shortly after his heats were broadcast, but withdrew for personal reasons after winning one game with 117 points. He partook in the Tiny Tots Tournament and the Apterous Masters 2011 tourneys.