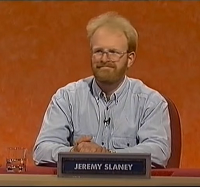 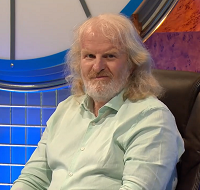 Jeremy Slaney was a contestant in Series 47 and an octochamp in 84. He was a gardener from High Halden in Kent.

Slaney débuted in January 2002, winning three games before losing his fourth to would-be series champion Chris Wills. Returning nearly 20 years later, Slaney won on his "second début" against Nick Smith. On his ninth overall appearace, Slaney finally achieved his first century, scoring 110 against Anna Sanders. In his seventh game of his second stint, Slaney solved a crucial conundrum to win with a low of 73. This time, Slaney's octochamp run was not halted as he beat Lisa Horan to claim eight straight victories unbeaten, with a cumulative score of 741 points. His numbers were especially strong.

Returning for the finals as the No. 4 seed, Slaney squared off against Matt Gould in the last quarter-final. While both players solved all the numbers games and unravelled IDOLATERS for nine, Slaney established an unassailable lead in the letters games and won with a personal best of 126 points. Slaney then took on number 1 seed Ahmed Mohamed in the semi-finals. Both players began strong with a first-round nine-letter word, but Mohamed's spot of RANCOROUS only three rounds later put Slaney out of striking distance. Slaney gained back some ground in the third "half" with the beaters MAGPIES and CLOUTED, but ultimately the top seed would prevail 118 – 65 and relegate Slaney to his second defeat. Slaney amassed an overall total of 932 points in his Series 84 run. With his Series 47 run, his overall total is 1,241 points. Mohamed went on to win the series, meaning that both of Slaney's defeats had been to the eventual series champion.