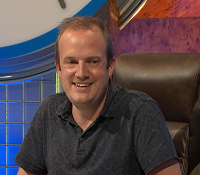 Matt Gould was an octochamp in Series 84. He was an Accountant who lives in Whitley Bay, Tyne and Wear, but is originally from Essex. He also became an Apterite after his preliminary games were broadcast.

Starting his run on 6 August 2021, Gould unseated four-time winner and Apterite Jason Dias, after Dias missed a crucial conundrum while being seven points down. Gould followed with seven more wins which included one century. In his seventh game against returnee Roy Gerrish, Gould was 14 points down going into the last numbers game but, after Gerrish declared nothing, Gould scored seven points before solving the crucial conundrum DEARNELLY to stay in octochamp contention. In his last preliminary match, he won with his first nine-letter word, REQUOTING. He amassed 680 points, giving him an average of 85 per game.

Gould returned for the finals in December as the No. 5 seed against fellow octochamp Jeremy Slaney. Despite bowing out with a respectable 94 points, Gould was finally eliminated by virtue of the letters games, allowing Slaney to prevail with 126 points. Gould finished with an overall total of 774 points.