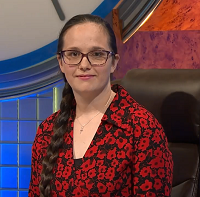 Florence Cappleman-Lynes was an octochamp in and the runner-up of Series 84, the first under Anne Robinson, and a semi-finalist in Championship of Champions XVI. She is also an Apterite. She lives in Rochdale and is married to Series 82 runner-up, and fellow Apterite, Sam Cappleman-Lynes. Notably, her performances in the Series 84 finals (in terms of knockout stages reached), and her Championship of Champions achievements make her one of the most successful female contestants in the history of the 15 round format, alongside Ann Dibben.

Florence started her Countdown journey in the 12th heat of the series on 13 July 2021, emerging victorious with the first century under Robinson. After a run of two wins with scores in the 90s, Florence wrapped up her unbeaten run with another five more, all with scores above 101. She solved a crucial conundrum in her sixth match against Jonathan Walne and concluded with a personal best score of 124 points.

Florence is the 50th member of the 800 club entirely under the "new" 15 round format, having attained 860 points across her run, and is the first woman, as well as the twelfth person ever, to solve all eight conundrums in their preliminary matches on the show. With 22 letters, she has the joint-longest name of any octochamp to date (the other being the late Michael Macdonald-Cooper).

Florence returned for the finals as the No. 3 seed on 17 December 2021 against seven-game winner and No. 6-ranked Jasamrit Rahala. Florence continued her dominant play as she ran clear to win with a total of 121 points out of a possible 122 and qualified for the semi-finals, where she faced Stu Harkness. In an excellent game, Florence took an initial 14-point lead after Harkness had outaged ☓ disallowed, and she declared UNIFORM in comparison to his FUMIER in Round 5. But Harkness closed the gap with a declaration of VAPOURS in Round 13, which led to a crucial conundrum. Critically though, Florence unscrambled INANEPEST to SEPTENNIA in just under 17 seconds to defeat Harkness, solve her 10th consecutive conundrum, and advance to the Grand Final against top-ranked Ahmed Mohamed.

In the final, Mohamed built up a 22-point lead in the first half thanks to spots like CINEASTE in Round 2 and HABITUE in Round 7. Florence did make a comeback though by beating him in the third numbers round, but Mohamed confirmed his win in the last letters round with PAGUROID and solved the conundrum in under two seconds to deny Florence a 100% record on them. Florence was thus relegated to her only defeat and finished coincidentally in the same position as her husband did in Series 82, with a final overall score of 1,172 points from 11 appearances.

Florence returned to the programme in January 2023 to take part in Championship of Champions XVI, entering as the only female player in the tournament. In the first game of the new year, aided by such spots as ONSTEEAD and AEOLIAN, she defeated Leo Smith, who had also lost to her husband in his semi-final. She, therefore, advanced to the Championship's quarter-finals, where she played her husband as he won his heat against Matt O'Connor.

In a hotly anticipated and very close encounter, Sam took an early 13-point advantage, but Florence created her own lead through spotting THUMBED and the darrenic HAPLITES. She maintained this lead going into a crucial conundrum which neither player was able to unscramble, securing Florence's victory and progression to a semi-final against James Haughton. She also managed to hold her husband to his lowest score on the show.

In the semi-final, Florence lost ground on Haughton thanks to spots from him like OSTALGIA, but after he made a mistake in the last numbers, she capitalised by closing the gap enough to force a crucial conundrum. Unfortunately, neither player could crack it, which meant Florence bowed out of the tournament, although, as she did with her husband, she held James to his lowest score on the show to date.

Florence appeared on ZoomDown Series 4 after her heat games. She comfortably beat Series 84 contestant Richard Williams, but lost to Eeshan Malhotra. When Eeshan withdrew from personal reasons, Florence was allowed to come back; however, she had been beaten by Luke Johnson-Davies with a score of 70 – 126.