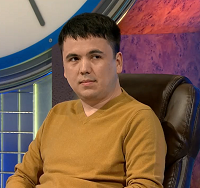 Leo Smith was an octochamp in Series 82. He was a Pest Controller from London.

Smith first appeared on 23 November 2020 against six-time winner and usually dominant player in the form of previous Series 61 contestant Martyn Simpson. Smith proved to be Simpson's toughest opponent, beating him in the first numbers round to take the lead. However, Simpson risked POLEWARD in round 7 to take the lead by one point, and later extended his lead in round 11 before Smith clawed back in round 12. Smith finally unseated Simpson on a crucial conundrum to win his first game. Smith continued a very solid run of performances, including spots of nine-letter words such as ORIENTALS and COLOURIZE, solving six conundrums and achieving seven centuries. Smith wrapped up with a total of 869 points to place third in the seed table.

Twelve days after completing his octochamp run, Smith began his finals campaign against number six-ranked Phil Hulme in the third quarter-final match. Both players exchanged the lead frequently while remaining within the crucial 10-point margin in a very tense fight. However, Smith's victory was eventually confirmed by the end of the final numbers round by nabbing seven points in a six-small gamble from Hulme. Smith then took on number 2 seed Sam Cappleman-Lynes in the second semi-final. Both players found REFASHION in the first letters round. Sam took a convincing lead, but Smith beat him in three letters rounds spotting PARBOIL, TWOCKED and DOPAMINE. However, it wasn't enough as Sam broke away and won the game with 124 points as Smith bowed out in his first defeat with 83 points, and finished with an overall score of 1,043 points in his series run.