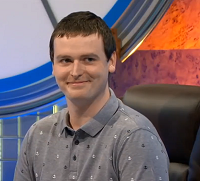 Sam Cappleman-Lynes was an octochamp in and the runner-up of Series 82, and a quarter-finalist in Championship of Champions XVI. He is a software developer from Rochdale. He is also an Apterite and a member of c4countdown. His wife Florence Cappleman-Lynes, also an Apterite, became an octochamp in Series 84, the first under new host Anne Robinson. Florence also finished as the series runner-up too.

Sam made his debut on 26 August 2020 against two-time winner Pete Reynolds, where a spot of the nine-letter word LONICERAS helped Sam win with an impressive 114 points to Reynolds' 33. The following day, Sam reduced multiple gameshow contestant Bernie Kingston to the lowest ever score in a 15-round game with just 5 points. Sam won an additional six games on the trot, including a personal best of 124 points, and accumulated 939 points en route to becoming the sixth octochamp of the series and the first octochamp since the COVID-19 hiatus. He came up with some very obscure words along the way, such as MOWDIES, TAIHOAED and WINDIGO. Clips of his eighth win were shown on Gogglebox on 11 September.

Sam returned to the show on 11 December 2020 to play the second quarter-final match against number 7 seed Damien Doughty. Sam took an early in the first two letters rounds, before Doughty beat him in the first numbers round. Sam eventually broke away by finding MASTIGURE for nine and solving a difficult conundrum – CRAZYLILO to ZIRCALLOY – to prevail with 121 points and qualify for the semi-finals, where he took on number 3 seed Leo Smith in the second semi-final. Both players found REFASHION for nine in the first letters round, before Sam established a convincing lead. However, Smith fought back by beating Sam in three letter rounds, but Sam later spotted one of the then newest additions to the ODO, SEMITONAL for nine, to take the game with 124 points and qualify for the Grand Final against number one seed Luke Johnson-Davies, setting up only the second episode in more than 7,000 to feature two contestants bearing double-barrelled surnames, the first being Episode 882 between Derek Stuart-Clark and John Gough-Cooper.

In the final, Sam played a close game to Luke, with both players scoring in the early rounds. But Luke soon picked up speed and Sam was unable to keep up with his strong word power, although both players found EUTOPIANS for nine. Sam notably gave a complex solution to the second numbers before bowing out with his first defeat and garnering an overall total of 1,279 points in his run.

Sam returned to the programme in January 2023 to participate in Championship of Champions XVI, where fellow series runner-up Matt O'Connor from Series 85 was waiting for him. The game was closely fought at first, with both players winning letters rounds against each other, but Sam eventually pulled away with spots like MEIONITE and an excellent solve of a difficult 2L numbers game, securing an eleventh century despite a nasty conundrum RETROSOFA proving out of reach for both players. This meant Sam progressed to the quarter-finals the next day, where his opponent was his wife Florence.

In an excellent encounter, Sam took an early lead thanks to TELLINA and DOTAKU, but Florence snatched back two rounds of her own with THUMBED and HAPLITES to take the lead herself. This lead was preserved going into a crucial conundrum which neither player was able to solve, which meant Sam bowed out of the tournament, with his wife also holding him to his lowest score of 93 points.

On Apterous, as well as having already achieved a Top 10 position in the Pro Ranks [1], Sam has also won a game of 'Apto Fifteen to One', hosted and written by Philip Aston. [2]

Outside of Countdown, Sam is an active member of the world of competitive puzzles. In 2018, he won the UK Sudoku Championships on his first attempt, followed by a runner-up finish in the same event the following year. He also came 40th in the 2019 World Sudoku Championships in Germany.