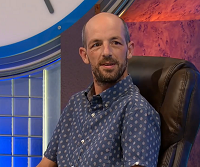 Damien Doughty was a octochamp in Series 82. At time of recording, he was a Creative Director on paternity leave living in Bristol, but was originally from Boston in Lincolnshire. He became an Apterite between filming his second and third games.

Doughty first appeared on 26 October 2020 against Scott Vickers, winning with 84 points to Vickers' 75. He followed this with 7 more impressive victories including a personal best of 111 points. In his eighth game, a spot of the nine letter word FACTIONED helped to finish his octorun with a score of 758 points. Doughty became the 200th octochamp of the 15 round era.

Doughty returned on 11 December 2020 to take on number 2 seed Sam Cappleman-Lynes in the second quarter final. Although Sam took points in the first two letter rounds, Doughty beat him in the first numbers round. However, Sam fought back and prevailed with 121 to Doughty's 71 points as Doughty took his first defeat, ultimately remaining true to the seeding. Doughty amassed an overall total of 829 points in his series run.

Retrieved from "https://wiki.apterous.org/Damien_Doughty"
Categories: Contestants in Series 82 | Teapot owners | Octochamps of the 15 round era | Finalists