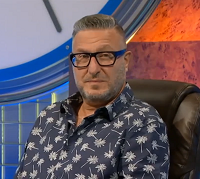 Bernie Kingston was a contestant in Series 82. He is a Pharmaceutical Broker from Warrington.

He is a serial game show contestant, Countdown being his 16th show. He was the very first contestant on Beat The Chasers. His other appearances include Blankety Blank, Wheel of Fortune, Wipeout, Today's The Day, Pass The Buck, Brainteaser, Judgemental, Take A Letter, Tellystack, Backdate, Split Second and The People vs. Jerry Sadowitz.

Kingston's score of 5 set a new record for the lowest ever 15-round score. However, he redeemed himself when he appeared on ZoomDown Series 2, scoring a very respectable 61 points and solving the conundrum BERNIELOL.

Retrieved from "https://wiki.apterous.org/Bernie_Kingston"
Categories: Contestants in Series 82 | Contestants on other game shows