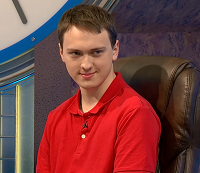 Philip Aston was the runner-up of Series 78 and a semi-finalist in Championship of Champions XV. He was living in Bideford in Devon at the time of filming, and now lives in Chulmleigh. He is also an Apterite and a contestant on ZoomDown.

Aston made his Countdown début on 21 February 2018, scoring a century and restricting incumbent champion Jill Thwaites to the then joint-lowest score for a daily champion in the 15-round era. Aston followed this up by achieving 123 points, the then-highest score of the series, against Sylvia O'Brien, then achieved four more wins, all but one of which was a century. Aston's conundrum speed, in particular, was exceptional; on three occasions, he buzzed in with a correct answer in half a second or faster (his fastest time was 0.25 seconds). His run ended in his seventh game, however, when he encountered fellow Apterite and previous Series 69 player Zarte Siempre. Though the game saw a high-quality letters performance, Aston dramatically lost form in the last three numbers rounds in which he failed to score, allowing Siempre to ultimately prevail 121 – 97.

With six preliminary wins and 760 points, Aston broke the record the highest-ever preliminary point total for a non-octochamp, surpassing Series 57 contestant Steve Baines' longstanding record of 758 (despite Aston playing only seven heats compared to Baines' eight). Aston's record stood for more than two and a half years until it was surpassed by Martyn Simpson in Series 82. After his defeat, Siempre said on-screen that Aston “absolutely deserves to be in the finals.”

Aston ultimately returned for these finals as the No. 7 seed. He then went on to achieve the first upset of the finals stages by overcoming No. 2-ranked Toby McDonald, a fellow Apterite from Somerset, by just seven points in their highly anticipated quarter-final. Aston followed this victory up with a semi-final triumph over Dougie Mackay, the highest-scoring seven-time winner in Countdown history; in this game, Aston's unravelling of the nine-letter word MONRADITE in the second letters round helped him prevail 98 – 76. This win brought Aston to the series Grand Final – a rematch of his heat game against Zarte Siempre.

In an epic final, Aston fought an even more fierce battle than he did before and opted for a safer numbers choice with one large in the form of a cross instead of his preferred "capital T" selections. Siempre took the lead once again when he spotted REPUSHED (which Philip discounted) in the fourth letters round but that was taken away when his disallowed declaration of superking ☓ allowed the score to even out at 90 – 90. Ultimately, it came down to the crucial conundum USEDLOGIC and with Siempre buzzing in with the correct answer GLUSOCIDE in 10 seconds, Aston was relegated to runner-up spot in his second defeat. Nonetheless, he achieved a personal best of 13 maxes here, and his score of 118 proved to be the highest ever losing score in a Grand Final of Countdown.

Aston returned to Countdown in 2019, as one of 16 participants in Championship of Champions XV. He encountered Noel McIlvenny in the last preliminary round of the tournament. Aston raced away to 20 points up by beating McIlvenny in the first, third and fourth letters rounds. Aston's lead was then cut to 14 ahead after having the hyphenated word bluewing ☓ disallowed. However, he maintained this lead all the way to an unsolved conundrum (which he almost got right) thanks to perfection in the numbers rounds – including the use of the '937.5 trick' in the last numbers round – to book a place in the first quarter-final match against Jonathan Wynn. Aston succeeded his previous performance with an 18-point victory over Wynn, largely by virtue of the nine-letter word AELUROIDS, which Wynn did spot but sadly misspelt it as aleuroids ☓. Aston yet again faced Siempre, who scored a record-breaking 150 on the show before, in the semi-final – only the second ever unforced "threematch" in Countdown history. Unfortunately – on his 13th and final show – a low-key Aston fell behind yet again and couldn't catch a break after his disallowed offering of maderiser ☓ put him 26 points down and his journey came to a crushing end with a low of just 73 points (although he was only beaten in three rounds here). On the conundrum CONTIINNU, he hilariously buzzed in with 0.25 seconds left with his final answer, BYE! Aston set even more unwanted records on Countdown by becoming the first contestant ever to lose to the same player three times, and achieving highest number of wins (10) without becoming octochamp, series winner or champion of champions in the 15-round era.

On 4 May 2020, Aston appeared on ZoomDown on YouTube. He beat fellow Countdown finalist Paul Nixon with 13 maxes in the first game of the show, but lost the second to Hazel Drury. He reappeared in Series 2 in a "Formula 1 special", but lost his only game to James Rowan. Aston had another attempt in Series 3, beating Series 80 champion Dinos Sfyris before losing to Ronan Higginson on a crucial conundrum.

Aston has also been a tournament Scrabble player since 2016. On 13 April 2019, he won the inaugural Bristol Open in Division B, his first tournament win in any division. Later, he came 40th out of 46 Division A players in the 2019 Mattel World Scrabble Championships in Torquay.

On 6 April 2020, two questions sent in by Aston featured in an episode of Radio 4's Brain of Britain, as part of the show's 'Beat the Brains' section. [1]

Aston is a passionate fan of Lewis Hamilton and has had many a discussion with Nico Rosberg-supporting Rhys Benjamin.