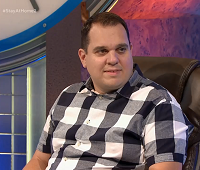 Martyn Simpson, 11 years after his first appearance, in Series 82.

Martyn Simpson was a contestant in Series 61 and 82. As of his second appearance, he was an Area Sales Manager in the Mobility Sector from Kingswinford in the West Midlands. He has also been an Apterite since 2009.

On Simpson's original début appearance on 12 November 2009, he lost by a score of 68 to Ryan Taylor's personal best of 123. 11 years and 1 day later, Simpson made his "second début" on 13 November 2020. After having two words disallowed, Simpson maxed all the numbers rounds and raced away to beat previous Series 1 contestant Andy Bruno to end Bruno's second run in his sixth game. In his fifth game of his second stint, Simpson won with a score of 132, the highest score on the show in more than 10 months. This was followed by a second consecutive score above 125 in his sixth win which included three nine-letter words, equalling the record for the most nine-letter words in a "new" 15 rounder. In a reversal of fortune, however, his run was terminated in his seventh game courtesy of a crucial conundrum solve by Leo Smith. Simpson did not make the finals of the longest ever series despite winning 6 games and totalling 794 points (an average of just over 113), meaning he has the highest preliminary point total and average score for a non-octochamp and non-finalist in Countdown history. Combined with his 2009 appearance, Simpson's overall record of points is 862 points.

In 2021, Simpson won the Phil Collinge Memorial Tournament on Apterous.