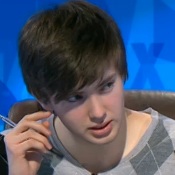 Giles Hutchings was the first series champion under the new 15-round format.

In accordance with Channel 4’s rearrangement of Countdown’s commercial break times, a new 15 round format was introduced for the show. The format replaced the previous 15 round format on 25 March 2013, a couple of weeks into the Series 68 preliminaries.

The celebrity anecdote has been moved to the middle of the second “half”, between Rounds 6 and 7; while Susie Dent's Origins of Words slot is between Rounds 11 and 12.