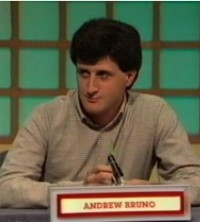 Andy Bruno was a contestant in Series 1 and 82 – a gap between appearances of nearly 38 years. In Series 1, he was a 27-year-old sales executive from Manchester. By Series 82, he was a retired Maths and Science Tutor from Stoke-on-Trent. He is also an Apterite.

He appeared in Series 1 under the lengthened name of Andrew Bruno.

In 1987, Bruno appeared on The Krypton Factor. He has also appeared on Eggheads, The Weakest Link, Tipping Point in 2017, Matchpoint, and The Travel Quiz.