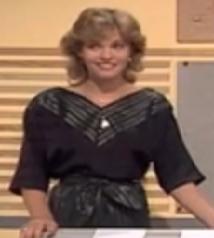 Beverley Isherwood was a former Miss England winner and Miss United Kingdom finalist, and apparently a favourite of Cecil Korer. She was Countdown's original "numbers girl" until it was realised that having a separate hostess just to put numbers up on the board was rather silly, and the task was given to Cathy Hytner instead.