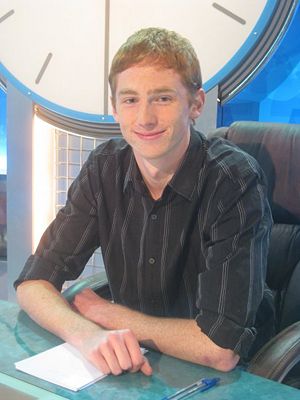 Ryan Taylor was an octochamp and finalist in Series 61.

His first game was against Jeremy Baker, who Taylor thought was Michael Fish when he walked into the green room and genuinely believed he was going to be a guest in Dictionary Corner. Taylor managed to beat Baker in a nervous first appearance on Countdown, opening with SWEATING ("convenient" — he added) and risking BENZINE in the final letters round to ensure a lead of 21 points going into the final numbers round, meaning Taylor had won which he clearly acknowledged with a huge sigh of relief on show for all to see. The revelation that the conundrum BONFIREUP (on 5th November) was in fact IBUPROFEN drew an extremely funny face out of Jeremy Baker.

Next up was Scrabble player, Chris Civil, who Taylor feared would be his downfall (although Civil is the only person to visit the east coast of Wales, so maybe not). An opening round spot of FILAGREE (which he had learnt the night before in the hotel) settled him down until the last third of the contest. The last third proved uncomfortable as Civil clawed points back but Taylor held on to win 76 – 54 in a low scoring affair.

Taylor was back after the weekend and was in high spirits, with two wins under his belt but this time he was under the watchful eye of Series 60 champion Kirk Bevins, Series 58 runner up Richard Priest, 3 time winner Konstadinos Sfyris and forumite and left hander Howard Somerset. Playing in front of these four people only spurred Taylor on and he comfortably beat Geoff Morris (playing in pink) by 43 points, although largely due to Morris' disallowed words. Also on this occasion, Taylor managed to crack a joke that rivalled some of Dictionary Corner guest Tim Vine's jokes (it certainly got more laughs).

Tuesday was Taylor's day of reckoning, as he had known well in advance that if he win his first 3 games he would be against Apterite and forumite Lesley Hines, a challenge that Taylor was uneasy about. After a drink and Countdown related chat with Hines the night before, it was time to be serious. Taylor tried to make it clear that they had played twice before and Hines had not won, Hines was not buying any of this psychological battle. The titles rolled, Taylor took his superstitious deep breath (which Rachel Riley laughed at) and the customary lean back in the chair (which didn't swing). After opening an 8 point lead in round 1 with a spot of MODERATE and Hines' disallowed dementor ☓, Taylor eased down, only to be pegged back to a 3 point lead after round 2. Spots of MARINADES and 9s from the selection SADITRONE from both contestants lead to a high scoring game. It was not until round 9 when Hines trumped Taylor with QUANGO that the 3 point lead turned into a 3 point deficit (the first time Taylor had trailed any opponent). 3 points behind became 11 after Hines excellently picked out INSANELY whilst Taylor tried to fudge an 8 before settling on a disallowed 7. With an 11 point deficit to claw back, Taylor dug deep and beat Hines in the remaining 2 letter rounds with BOLETE and PICTURE to regain the lead. The 3rd easy numbers round did not separate the two and it was Taylor's first crucial conundrum. As the clock ticked down with no contestant being able to solve it, Taylor breathed a huge sigh of relief and was ecstatic with his 4th victory yet felt for Hines as she lost with a score of 104. Kirk Bevins made a cameo with the conundrum spot of RAINSWEPT (which Taylor had also learnt the PAINTERS stem the night before, although not learnt it well enough)!

After the drama of the previous game Taylor went on to play David Woodward and soundly ran out the winner with a score of 105 – 36 (although still with no conundrum solve which host Jeff Stelling liked to mention and Ryan did not).

In Taylor's sixth game he faced another Apterite in the form of Martyn Simpson, who had beaten Taylor the last time they had played on Apterous (but had a winning record of 16 – 1) so this comforted Taylor, slightly. They were always close games though and anything could happen. However with Simpson missing a triple nine ROSTERING/RESTORING/RESORTING in round 9 and Taylor spotting one of them, it pretty much ended the contest. Taylor went on to solve the conundrum WRATHWIND after 27 seconds (much to his relief) to win the game with his highest score of 123 – 68. Taylor thought Simpson was probably still hoping that they would cut what he said in his introduction to save his job, causing him to miss some words.

Lucy Bolton faced Taylor next and witnessed his comprehensive sixth victory and as such went into the game hoping to just not finish with 0. Unbeknown to Taylor, he had been on a honeymoon with Lucy before and so these two were no strangers. Bolton battled bravely and had it not been for some gambling on words and the decision to not put an S on HEPATIC, Taylor would have lost, yet he rode his luck and grinded out his 7th victory 89 – 76. Taylor had performed well enough to have the chance of becoming an octochamp and would once again be watched by Kirk Bevins in the audience for his 8th game. Taylor's 7th game however was perhaps overshadowed by Tim Vine's uncharacteristic behaviour which brought controversy to the game of Countdown, not for the first time. Tim Vine was a clear admirer of Bolton and wished for Taylor to lose (a point he didn't wish to keep quiet). The distasteful banter shared by Taylor and Vine sparked outrage from the Edinburgh Countdown Club watching on from the audience. In the end after much cut footage (including quite a serious stare-out between Taylor and Vine), Taylor emerged the bigger man. Not only had he ousted Vine as the funny man of Countdown at the start of the week, he had now ousted his love.

On the Monday, with the controversy behind him, Taylor distinctively wore a question mark tie. Taylor's opponent would be Canadian Ryan "Vick" Vickers, a game show fanatic. Taylor used the usual pre-match routine of mind games, discussing Apterous and his previous 7 victories to unsettle Vick. Taylor led 14 – 0 after 2 rounds (the mind games had worked) and increased this lead with spots of TENUTO, NODDIES and IMPLORES before being titled an octochamp with an 8th victory of 103 – 51 (his fourth century in his run). Taylor qualified for the finals of Series 61 as seed No. 4 behind "the big three" of Andrew Hulme, Chris Davies and Innis Carson.

Taylor played Brian Selway in the fourth quarter-final (which was the tallest finalist versus the shortest). Despite trailing after the first four letter rounds Taylor comfortably beat Selway 91 – 71 to devastate Selway (and his fans back home in Honiton) to book his place against the No. 1 seed Andrew Hulme in the semi-final. Despite Selway looking disappointed Taylor and Selway shared a very limp handshake to reconcile their friendship.

Taylor, cheered on by his 7-strong team of Yorkshire lads was relaxed for this semi-final, too relaxed in fact. Despite opening round 1 with PUDENDA (learnt from Craig Beevers on the forum just days before) he fell behind, and never managed to regain ground on Hulme. Taylor didn't beat Hulme in any round as he reeled off spots of POLEAXE, LABIATE and DEFROST to leave Taylor licking his wounds. The final score was 95 – 48 to Hulme, and Taylor's dreams of Series 61 champion (however little they may have been) were convincingly ended. There was just time though for 3 time winner Konstadinos Sfyris to solve the unsolved semi-final conundrum. Cue the appearance of Taylor's faithful followers who were sat next to Sfyris who said "Is it TUNESMITH, Jeff?" in a lovely Sheffield accent. Countdown mug won!

In 2013, he returned to the show for a special episode against his girlfriend and Series 64 quarter-finalist, Michelle Nevitt. In a close game, Taylor just edged out Nevitt by a score of 88 – 81.