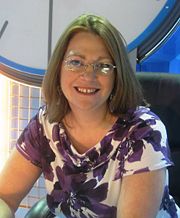 Lesley Hines was a contestant in Series 61.She is from Worcester, and her catchphrase is "Hurrah!".

Also in 2010, she returned to the studio to take part in a special episode against fellow "high-scoring loser" Micheal Harris.