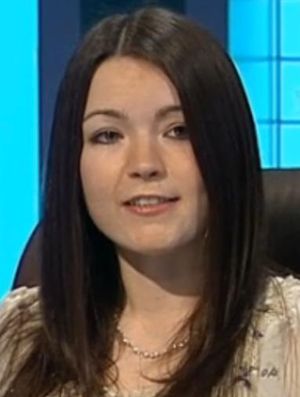 Michelle Nevitt was a finalist in Series 64. She was a customer services adviser from Lanarkshire.

Nevitt made her debut on 2 March 2011 by defeating Nick Adigu-Burke on an unsolved crucial conundrum, then went on to win three more heats before succumbing to future semi-finalist Andy McGurn. However, she was able to qualify for the finals as #8 seed (following Graham Hill's no-show), and took on #1 seed Adam Gillard (with a total of 903 points) in the first quarter. Gillard won handily although Nevitt did manage to spot a nine-letter word, CONVERTER.

She returned for a special episode in 2013 against her boyfriend, the Series 61 semi-finalist, Ryan Taylor. In a close game, which went down to a crucial conundrum, Taylor just held out to win by a score of 88 – 81.

She is also an Apterite. She made her CO-event debut at COLIN 2012, and then participated in COHUD, CobliviLon and COEDI in the same year.