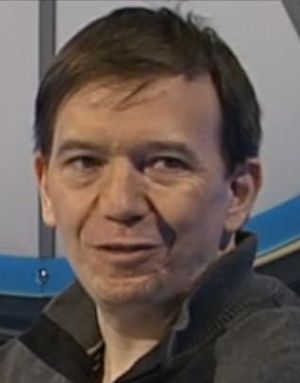 Andy McGurn was an octochamp and finalist in Series 64. He is an Apterite and member of c4countdown. At the time of recording, he was a social worker from Leeds.

McGurn was No. 4 seed for the quarter-finals, inevitably setting him up for a close match against No. 5 seed and fellow Apterite, Ned Pendleton. For a time, Pendleton led by eight points, but McGurn caught back up with TOMATINE, and a laughably easy final numbers game was followed by a conundrum that neither player was able to unscramble in the time. A second conundrum, ONIONPIGS, was thus necessary. Pendleton buzzed first, but his answer was incorrect, leaving McGurn to correctly get POISONING and win. In the semi-finals, however, he was defeated by Adam Gillard.

Between November 2020 and January 2021, he appeared on three episodes of Only Connect as part of the "Colleagues" team, facing Martin Hoskins and John Caddick in his second episode.

* includes 10 points from a tie-break conundrum
Retrieved from "https://wiki.apterous.org/index.php?title=Andy_McGurn&oldid=148260"
Categories: