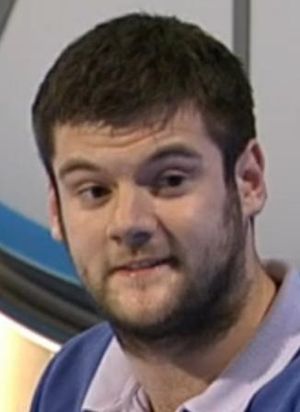 Ned Pendleton was an octochamp and finalist in Series 64. He is a travel enthusiast from London. He is also an Apterite and a member of c4countdown.

Pendleton debuted on 17 February 2011 in a game against Mark Jones. Despite having offered invalid words in the first two rounds, a good performance on the numbers (his preferred selection was 4 large) helped him to a 69 – 62 victory. His next two games were fairly close, but his scores improved and he completed an octochamp run on 28 February, notably also beating Dan McColm, who would become a series champion and CoC runner-up on his return.

Pendleton returned as number 5 seed for the quarter-finals, meaning that he drew fellow octochamp Andy McGurn. The game was extremely close and the scoreline was dead level going into a crucial conundrum which neither got right. It was ultimately decided on the sudden death conundrum ONIONPIGS, to which Pendleton buzzed in first, but under pressure offered an eight-letter answer. McGurn correctly found POISONING immediately after Pendleton's blunder, meaning that Pendleton suffered his only ever defeat. He also holds the dubious honour of being the first player to ever guess multiple conundrums incorrectly during the same game (outside of the Countdown Masters).

After appearing on the show, he made his Co-event debut at Co:Lon 2011, followed up by an appearance at CobliviLon. In 2015 he appeared on Two Tribes, Hive Minds and Only Connect, in 2016 he appeared on Fifteen to One, in 2017 he appeared on Eggheads and in 2019 he appeared on Who Wants to Be a Millionaire? but failed to win a Faster Finger First question.