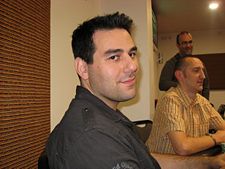 Jon Stitcher has got fatter since his TV appearance, mainly due to no regular exercise and keeping goal for Sensible Soccer FC in the Wirral Monday night 6-a-side league.

Jon Stitcher was a contestant in Series 52. He managed to string together three victories in total, demonstrating consistency by always winning by slim margins, never scoring outside the 80s, and having all of his victories come down to crucial conundrums.

In his fourth game, Stitcher found himself up against Jack Welsby (who, at the time, held a world record). Welsby proved too strong for him, winning by a margin of 37 points despite Stitcher leading at the halfway stage after finding the nine-letter DISLOCATE. Notably, an amusing coincidence at the start of this part of the programme saw a teatime teaser with the answer MUTINEER immediately followed by a letters round with the selection NTEUMRIEK - the longest possible word being MUTINEER!

Stitcher established something of a reputation for misspelt or simply non-existent declarations; some of his more 'creative' offerings include busline ☓, girates ☓, facinated ☓ and carots ☓.

Following his appearances on the programme, Stitcher played in JOLT, one of the first online tournaments, where he reached the final and faced a crucial conundrum against Julian Fell. He also attended CoBris 2005 where he came 3rd out of 20, and COLIN 2006, where he came 6th out of 33.

Stitcher is now a professional poker player. Furthermore, he expanded his repertoire by appearing on BrainTeaser, and the ITV game show The Krypton Factor in February 2009. In 2014, he appeared on and won his heat of Fifteen to One, defeating the legendary Dag Griffiths in the process and becoming only the second person after David Stainer to win both a Countdown teapot and a Fifteen to One winner's trophy. Eileen Taylor and Tom Rowell have since matched this feat. He later appeared on series 11 of Only Connect as part of the Athenians team and played against Ned Pendleton in his first game and both Innis Carson and Ian Volante in his second game.

In September 2016 he appeared on The Chase where he was part of a team which beat Mark Labbett to take home an equal share of £36,000. During the show, Labbett commented that Stitcher had been on more quiz shows than he had. His next quiz show appearance was Mastermind in 2018, but he lost his heat. He then appeared on Who Wants to Be a Millionaire? on 2 January 2019, walking away with £1,000 after selecting a wrong answer to a £16,000 question. In 2019, Stitcher appeared on Very Hard Questions on More4. In 2020, he appeared on Brain of Britain on Radio 4, winning his heat with no studio audience present. In 2022, he appeared on Eggheads on Channel 5, as part of the O.Q. Elite team.

He is the founder of the Online Quiz League.