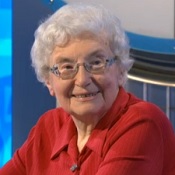 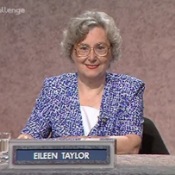 Eileen Taylor was a contestant in Series 22 and an octochamp in Series 68.

At 74 years old, Taylor is the oldest octochamp in the show's history. She began her run with an unsolved crucial conundrum seeing her defeat Jill Hayward and continued on to become number 3 seed for the finals. As fate would have it, her quarter-final was a rematch of her first appearance. This time Taylor sealed victory before the conundrum (which Hayward solved) to set up a semi-final against Andy Platt. Taylor was unable to keep up against the number 2 seed as Platt achieved victory with a score of 120 – 65.

In 2014, she returned to the show for a special episode against Priscilla Munday, which she won by 5 points.

In 2002, she appeared as a contestant on Fifteen to One. She also appeared on The Chase in 2011, and Tipping Point. In 2016, at the age of 77, she again appeared on Fifteen to One, hosted by Sandi Toksvig, winning the final in her third game and becoming only the third person after David Stainer and Jon Stitcher to own both a Countdown teapot and a Fifteen to One winner's trophy.