Series 22 ran from July 1991 to September 1991. The twenty-second of 53 series presented by Richard Whiteley, it was won by Chris Waddington.

This was the first series to adopt the method of sudden death conundrums to resolve a tie, as opposed to a replay on the following broadcast.

With the exception of Episode 1180, most of the series was repeated on the game show channel Challenge as part of a "Classic Countdown" slot in the autumn of 2015, broadcast in the evenings. It has since been repeated on Challenge, usually in an early morning slot, at least once since this broadcast. 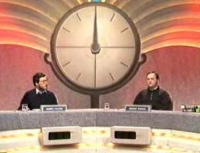 This series marked the debut of the Wings set, seen above. It was turned purple in 1996, then tangerine in 1999, before finally being replaced in 2003.