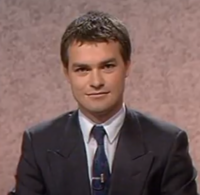 David Webb in his debut game... 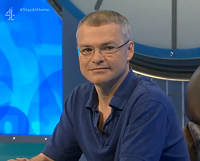 ...and 21 years later in the 30th Birthday Championship.

David Webb was a finalist in Series 22 and a contestant in the 30th Birthday Championship.

Webb notched up a run of 5 wins in the heats before losing his 6th game to eventual runner-up Robert Teuton. Webb qualified for the finals as No. 4 seed, dispatching No. 5-ranked Una Szewc before losing to octochamp and eventual series champion Chris Waddington.

Webb returned to Countdown in 2013, as one of 41 contestants taking part in the 30th Birthday Championship. He lost his only match against Series 6 champion Darryl Francis by a score of 86 – 68.

Webb is also a Scrabble Grandmaster, and finished runner-up in the National Scrabble Championship on 18 October 2009, beaten by Countdown's Series 57 champion Craig Beevers. He is known as "Dweebovision" on YouTube [1] and regularly uploads videos of himself playing the game on Internet Scrabble Club and in face-to-face tournaments in the UK and around the world. In 2019, he and fellow Scrabbler Bob Violett set a new record for the highest combined score in a tournament game: 1,213 points. [2]

Webb is also a crossword buff, having contested The Times Crossword Championship in 2019. He has appeared on numerous game shows; he won a house on ITV's Raise the Roof, and won an impressive 30 times on 100%.