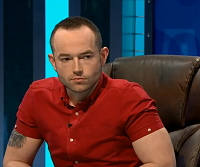 Andy Platt in the Championship of Champions XIV.

Andy Platt was an octochamp in and the runner-up of Series 68, as well as a participant in Championship of Champions XIV. He is also an Apterite and member of c4countdown.

Platt is the seventh person to have scored a century or more in all of his eight heat games. At the time, he also set a record for aggregate winning margin in preliminary games with 565, which has since been eclipsed by Dylan Taylor's 628.

Platt returned for the finals of Series 68, which was a shorter series than normal due to the 30th Birthday Championship running from January to March 2013. In his quarter-final, he trounced three-time winner Chris Ball by scoring in every round but one. Platt's victory in his semi-final against Eileen Taylor was also impressive in that he scored in every round, including ten points for a clever solution to a 4-large numbers game in which he multiplied 100 by 75 before cancelling down. His Grand Final battle against the top-seeded wunderkind Giles Hutchings proved to be much more difficult though, as Platt trailled 14 – 0 to Hutchings after the first two rounds. Although Platt managed to win Round 4, he then lost two more letters rounds and was beaten 95 – 86, but he did solve the conundrum to deny Hutchings a century.

Platt returned in 2016 for Championship of Champions XIV, facing off against David Barnard in the first round. In a tight game, Platt prevailed 98 – 90 thanks to the crucial conundrum RITEWRONG. He then played Dylan Taylor in the quarter-finals, losing by 127 – 125, despite leading thanks to spotting URNFIELDS, meaning he has the highest losing score in the show's history.

Platt made his Co-event debut at CoChest finishing in 3rd place, which he then followed up with another 3rd place at COLIN 2012, then he won Group B at CoLei5. He subsequently attended COHUD, winning Group C, CobliviLon, COEDI and COLIN 2013, the latter of which resulting in a tie for 4th place with Matt Bayfield. He came 5th at COHUD2.

Appearances on Only Connect

Along with Apterites Stephen Read and Sam Prouse, he appeared in the 2019/20 series of Only Connect as part of the "Lexplorers" team. On their first appearance on 9 September 2019, they ended up winning their game comfortably by a scoreline of 10 – 34 against the Gladiators. They appeared in the second round on the 2 December 2019, and after a tough game, won 13 – 9 against the Suits. They appeared in the quarter-finals on 10 February 2020, and their run came to an end after losing 16 – 21 in a rematch to the Suits.