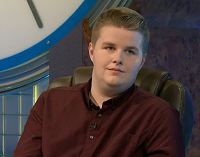 George Armstrong was a contestant in Series 78. He has since become an Apterite and an attender and organiser of Co:events, as well as a member of the ZoomDown team. He is also a moderator on the Countdowners Facebook group.

He was the audience member who solved the conundrum in Episode 7221.

Armstrong first appeared on 30 March 2018 against John Cole, winning with 75 points to Cole's 69. He then won his second heat game on a tie-break conundrum. He then achieved a personal best of 104 points, before losing his fifth heat game to Luke O'Neill.

Armstrong returned to Countdown on 21 December 2020 for a special episode against Series 73 semi-finalist Tom Carey. The special was the first episode presented by Colin Murray, who had been the Dictionary Corner guest in Armstrong's last three heat shows in Series 78. Both players played a strong game and spotted PLANETOID for nine. Armstrong solved the conundrum, bowing out in another defeat with 110 points to Carey's strong 122 points. Armstrong's 110 was the highest losing score for a special, beating Scott Mearns's record set in Episode S9.

* includes 10 points from a tie-break conundrum
Retrieved from "https://wiki.apterous.org/index.php?title=George_Armstrong&oldid=143989"
Categories: