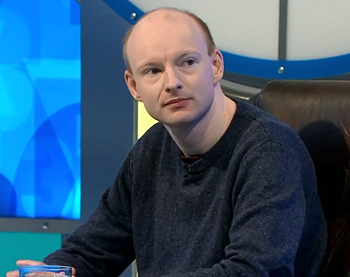 Stephen Read was an octochamp in and the champion of Series 76, and a participant in Championship of Champions XV. He is also an Apterite. He is the 75th member of the 800 club in the 15-round era. On Apterous, Read is known for making Jo Brand-style puns of the letter selections online during the day's Countdown broadcast.

Read made his televised debut on 5 May 2017 and went on to score a century in all his heat games (only the 15th contestant to do so) to top the series seed table with an octochamp total of 915. He proved to be very strong in the letters games, with impressive findings such as DRAGONET, NOTEPADS, MALONATE and PRESOAKED beating the contestants. He also scored 308 points in 32 numbers games, the then second-highest score from numbers rounds alone in an octorun after Dylan Taylor’s 311.

Read returned for the finals in June as No. 1 seed. In his quarter-final, he prevailed over No. 8 seed James Slater but only managed 92 points. His run of centuries would have been maintained had he not voided MORALISER, and he was also beaten by Slater's findings of CATHOUSE and CUISINE. Read also picked 6 small instead of his usual 2 large.

In his semi-final against Annie Humphries, Read accelerated again, scoring 115 to his opponent's 67 and achieving a maximum score in all but two rounds to secure a berth in the grand final of Series 76. This time he switched to 2 large.

Finally, in the ultimate show of the series, he showed no sign of slowing down as he beat Moose Rosser by a margin of 50 points to take a well-deserved set of dictionaries and become the latest owner of the Richard Whiteley Memorial Trophy. Read hence became a "xicount" with an 11-game total of 1,230 points.

Read returned to Countdown in 2019 for the Championship of Champions XV, where he faced Tom Carey in the tournament's fourth preliminary game. Read was the only player from Series 76 to participate in the tournament. The game was close throughout, with Read notably making a late leap thanks to his spot of PIPEMAN to force a crucial conundrum. However, the Series 73 semi-finalist unravelled HAIRYDENT to take the game 106 – 87, relegating Read to his only defeat to date.

In April 2016, he attended his first Co-event – Countdown in Leeds 2016 – followed up in May 2016 by his attendance at Countdown in King's Lynn 2016, which he won. He beat Series 69 champion Callum Todd in the final on a tie-break conundrum, having been 20 points adrift earlier in the game, spotting the low-probability 6 DOODAD in the process. He also won Countdown in Birmingham 2016 and reached the final of Countdown in Huddersfield 2016, meaning he either won or was runner-up in three of his first four Co-events. He was awarded FOCAL's 'Rookie of the Year' prize for 2016.

Appearances on Only Connect

Along with Apterites Sam Prouse and Andy Platt, he appeared in the 2019/20 series of Only Connect as captain of the "Lexplorers" team. On their first appearance on 9 September 2019, they ended up winning their game comfortably by a scoreline of 10 – 34 against the Gladiators. They appeared in the second round on the 2 December 2019, and after a tough game, won 13 – 9 against the Suits. They appeared in the quarter-finals on 10 February 2020, and their run came to an end after losing 16 – 21 in a rematch to the Suits.