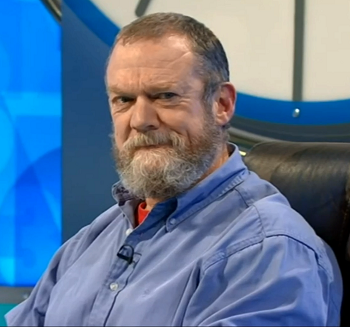 Moose Rosser was an octochamp in and the runner-up of Series 76. He is a Welsh/Australian Head of Risk Management from Essex who became known as “The Moose” during his time on the show due to his sense of humour.

On his début, he scored 83 before winning a tiebreak conundrum in his second game. He increased his winning score from his third show to his seventh, where he scored 132 to better highest score of the series set by Stephen Read by 1 point. The Moose garnered a total of 828 points and qualified to return to the show in June for the series finals as #3 seed.

In the quarter-finals, Rosser prevailed over Wesley Jardine in a very close match, picking out the nine-letter word ETHNICIST and sneaking through on the unsolved crucial conundrum POLICECAR (ironically he previously served 31 and a half years in the police). He then achieved an upset in the semi-finals, knocking out #2 seed Jeff Clayton 88 – 84 by spotting that LOSTMYCAP became CYTOPLASM. Unfortunately, for the Moose, he was outclassed in the grand final - the last game to be played in the long-lived original version of the blue Countdown set - by 900-club member, Apterite and FOCAL player Stephen Read by 50 points. His runner-up finish arguably makes him among the strongest non-Apterites to appear on Countdown during the 2010s.

* includes 10 points from a tie-break conundrum
Retrieved from "https://wiki.apterous.org/Moose_Rosser"
Categories: Contestants in Series 76 | Teapot owners | Octochamps of the 15 round era | Finalists