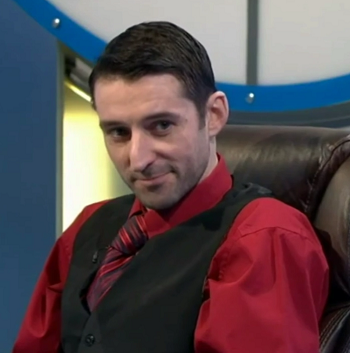 Wesley Jardine was an octochamp in Series 76. During his time on the show, he became known as "Waistcoat Wes" due to his smart attire.

Jardine achieved five centuries during his octochamp run and qualified for the Series 76 finals as #6 seed, but narrowly lost his quarter-final — and with it, his unbeaten record — to #3-ranked Moose Rosser, also known as "The Moose", on the unsolved crucial conundrum POLICECAR.

His brother, Jamie, had previously won one game of Countdown in Series 71.

Retrieved from "https://wiki.apterous.org/Wesley_Jardine"
Categories: Contestants in Series 76 | Teapot owners | Octochamps of the 15 round era | Finalists | Contestants on other game shows