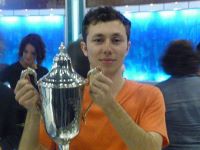 This series is also notable for the ODE3 being replaced by Oxford Dictionaries Online (ODO), and with Susie Dent now using a laptop computer in place of a paper dictionary and pencam in Dictionary Corner.