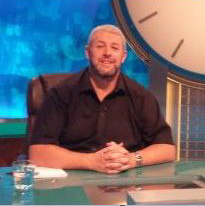 Mark Davies in the champion's chair.

Mark Davies was an octochamp in Series 71.

He was no relation to his opponent in his fourth game, Robbie Davies.

Davies' octochamp run began in the game following Tricia Pay's octochamp coronation. Davies began in terrific form, holding back his opponent Amy Trueman from scoring until round 6. Davies continued to march his way through the game, scoring in every round other than the conundrum, allowing him to emerge as victor with a very impressive debut score of 102. Davies played consistently throughout his following games, with brilliant spots such as RATIFIERS, NUMERALS and BANSURIS allowing Davies to achieve a further five centuries. Davies performance slipped slightly in his fifth game, against Bill Linton, as Davies failed to max a single numbers round, as well as being beaten by Linton's spot of VOICES. However, Davies still managed to trouble through, solving the crucial conundrum BREAKFAST in just two seconds. Davies' next game would prove to be the strongest of his run, spotting two niners REACTIONS and OUTSCORED, guiding him to an incredible score of 137 - one of the highest scores in the history of the show. Davies stormed through his remaining two games and finished his run with a total of 844 points, qualifying as seed #4 for the series finals.

Davies returned to our screens for the series finals as #4 seed, to face #5 seed George Ford in the quarter-finals. With just 12 points between the two seeds, the game was expected to be very close-fought, and it certainly was. Davies acquired a 7-point lead after Ford uncharacteristically blanked on a numbers round, however Ford instantly reversed this mistake by spotting the eight PASSIVES. Davies didn't give up here, and the lead changed once more when Davies spotted the eight LACINESS, to regain his 7-point lead. However, the following round saw Davies declare the invalid montaged ☓, allowing Ford to grab the lead once more. Davies then failed to score on the following two numbers rounds, and so despite solving the conundrum GHOSTLIKE in just eight seconds, Davies' remarkable Countdown run had come to an end.

His wife, Ann-Marie, was a contestant in Series 72, with Davies briefly reappearing the day before as the audience member who solved the conundrum. In 2015, he appeared on Fifteen-to-One. In 2019, he appeared on Pointless, winning the show on the first attempt, but not the jackpot. Later that year, he appeared on Only Connect as part of the "Gladiators" team, alongside his wife Ann-Marie, but they lost both their matches.

Retrieved from "https://wiki.apterous.org/Mark_Davies"
Categories: Contestants in Series 71 | Teapot owners | Octochamps of the 15 round era | Finalists