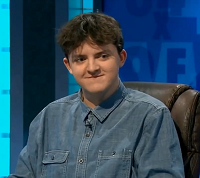 George Ford in the Championship of Champions XIV. 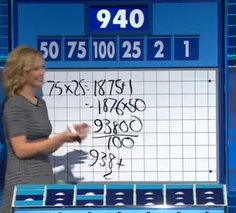 George Ford was an octochamp and semi-finalist in Series 71, as well as a participant in Championship of Champions XIV. He is also an Apterite.

Appearance on the programme

Ford began his octochamp run with a controversial victory against two-time winner Jonny Rye. In the game, Rye's offering of HEADWAYS was disallowed by Susie Dent. This has since been recognised as a mistake by the Countdown team. Ignoring the controversy, Ford emerged with a strong debut score of 102, the first of seven centuries. His next game proved to be the strongest of his run, spotting the nine CAPONIERS and by solving a numbers game with a method involving going up to 97,500 and coming back down again. Ford continued his unorthodox numbers solves throughout his run, even managing to stump Rachel Riley on a few occasions. The remainder of Ford's games were relatively consistent with Ford spotting words such as AGISTED, CONDUITS and AVIATOR. Ford also only dropped below 100 in one game, against Stewart Fraser. Fraser was also the only challenger to beat Ford in a numbers game, however Fraser wasn't as strong in the letters rounds and only managed to score 5 over all 10 of the letters rounds – the lowest of any competitor playing under the 15 round format. Despite the lack of nines present (only CAPONIERS from his 2nd game), Ford finished his run with a very strong cumulative total of 832 – averaging 104 per game. Despite the strong score, Ford only qualified as 5th seed for the finals, making him both the highest-scoring octochamp with only one nine available, as well as the highest-scoring 5th seed in the history of the show. Ford's popularity with viewers during his run sparked the creation of the Facebook group 'The George Ford Fanclub', which provided fans with summaries of Ford's games, and highlights of his performances.

Ford returned to our screens as No.5 seed for his quarter-final against No.4 seed Mark Davies. Davies took an early lead when Ford blanked out in the first numbers round, however Ford retaliated in the next round by spotting the eight PASSIVES. The lead then changed back once more when Davies spotted LACINESS, followed by another lead change in the next round when Ford uncovered NEMATODE. From here on Ford scored in every round up until the conundrum THESKILOG, which Davies unscrambled in just eight seconds to be GHOSTLIKE. Despite Davies' solve, it was Ford that took the game with an impressive score of 90 against 78. The win saw Ford progress to the semi-finals, where he faced the seemingly invincible No.1 seed Dan McColm. Though Ford fought hard against McColm, the invalid offerings pattie ☓ and ambroise ☓ along with brilliant spots by McColm such as RIBOSOME and ROUILLE meant that Ford's run had finally come to an end. However, some consolation for Ford is that in this game McColm didn't drop a single point, giving him the 10th perfect game in the history of the show. Ford left the studios with 9 wins and 999 points to his name.

Ford returned to Countdown for Championship of Champions XIV in 2016, facing off against fellow University of Exeter alumnus Jen Steadman in the first round. Steadman emerged victorious in the encounter.

Ford appeared on Eggheads on 19 September 2019.

Retrieved from "https://wiki.apterous.org/George_Ford"
Categories: Contestants in Series 71 | Contestants in Championship of Champions XIV | Teapot owners | Octochamps of the 15 round era | Finalists