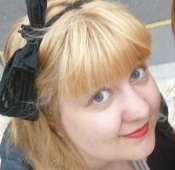 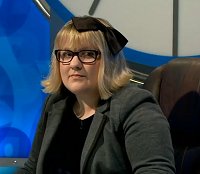 Jen Steadman in the Championship of Champions XIV.

Jen Steadman was an octochamp in Series 69 and a participant in Championship of Champions XIV, and is statistically the greatest female octochamp in Countdown's history. She is also a member of Apterous and C4Countdown, and was the PR and Marketing Officer for FOCAL.

In her run, which began with the defeat of Peter Etherington on 30 August 2013, and was completed with the defeat of Ross Lander on 10 September, Steadman broke various records. In becoming the third highest-scoring contestant in the show's history with 952 points, she became the first woman to score above 900 points in her octorun, scored the highest ever score by a woman with her 130 against Ian Toulson in her 4th game, and became the first woman (and only the tenth player after Julian Fell, Craig Beevers, Andrew Hulme, Eoin Monaghan, Jack Hurst, Adam Gillard, Giles Hutchings, Andy Platt and Dylan Taylor) to score eight centuries in her eight preliminaries.

Steadman returned to the finals as number No. 2 seed. Despite her record-breaking octochamp run, she failed to solve the crucial conundrum GANGLIONS and was beaten in her quarter-final match by 7-time winner Callum Todd, who went on to win the series.

In 2015, Steadman returned to the Countdown studio as a contestant in 8 Out of 10 Cats Does Countdown Series 6, Episode 6, assisting Sean Lock and Jason Manford to victory over Sarah Millican, Jonathan Ross and Roisin Conaty.

Steadman returned in 2016 for Championship of Champions XIV, facing off against fellow University of Exeter alumnus George Ford in round 1, winning 126 – 99. In the quarter-final, Steadman once again faced Callum Todd. This time, Steadman emerged victorious by executing some superb power plays to avenge her Series 69 defeat 107 – 85 to claim her place in the semi-finals. Relative to contestants' prior win counts, this formed the first upset of CoC XIV. In the semi-final against "Cool Dan McColm", after being level for the first six rounds, Steadman fell behind to new word ROSMARINE, but reduced the gap with another new word, MOMENTAL, in Round 11. The next round however saw both contestants offering risky 8s. McColm's offering of GENIUSED was good, but Steadman's attempt of unsieved ☓ was invalid. A flat Round 13 and easy last numbers saw McColm avoid a crucial conundrum. Steadman solved ENIDPLATT to sign off with a score of 117, at the time the show's second-highest losing score. This confirmed her as one of five octochamps to never score under 100 points on the show, along with Dylan Taylor, Julian Fell, Craig Beevers and Jack Hurst.

Away from the studio, Steadman was the 2017 FOCAL season runner-up, coming 2nd to Rob Foster in the 2017 FOCAL finals. She hosted Co:Lon 2017, which smashed the Co-event attendance record by attracting 68 players (the previous highest was 52), and CO:LON:2, which maintained the high level of interest with 67 players.

Steadman has enthusiastically supported Tonbridge Angels FC since 2006. She also enjoys travelling, being stylish, and collecting hair accessories in her spare time.