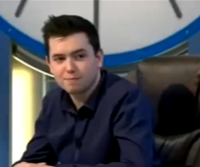 Laurence Killen in his semi-final game.

Laurence Killen was an octochamp in Series 71.

Killen started his octorun with an impressive score of 118 against Jamie Jardine. Although he never scored this highly again, he rattled off seven more impressive performances to become number 6 seed for the finals. Up against Tricia Pay in his quarter-final, the game was close but a numbers game and unfortunate disallowed word for Pay gave Killen the advantage, which he kept and avoided a crucial conundrum. Antoinette Ryan was up next in the semi-final for Killen, but despite another close game, he couldn't top the number 2 seed and saw his run end after ten games.