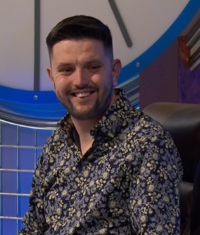 Edward "Ed" Byrne was a contestant in Series 71, and an octochamp in and the runner-up of Series 86. He is also an Apterite. In his first appearance, he was studying history, politics and Irish language at University College Dublin. As of his second appearance, he was a civil servant from Booterstown in Dublin. In addition, although his nameplate read Edward, he was referred to as Ed. Notably, Byrne's appearances in his second run span Anne Robinson's final eight shows as presenter.

Byrne made his debut as a contestant in the near-end of Series 71 in 2014, winning his first game on a crucial conundrum and losing his second game to another crucial.

However, after years of practising on Apterous and participating in Co-events, Byrne was allowed to return more than seven and a half years later, in 2022, to compete in Series 86, and began his second run by scoring a century over Paul Harcourt. His octochamp pursuit was not halted this time, after winning a further seven games without falling below 104. As well as becoming an octochamp on Anne Robinson's final episode against fellow civil servant Matt Greer (in which Byrne found back-to-back nine-letter words), he also joined the 900 club, with 969 points to his tally (at that point the fifth highest of all time). He also became the second octochamp in the first 18 episodes of the series, and recorded the then-highest score of 2022, having racked up 143 points in Robinson's last show. Clips of the seventh game of his second run were shown on Celebrity Gogglebox on 15 July.

Qualifying for the finals ranked second, Byrne comfortably dispatched No. 7 seed Steven Etherington in the second quarter-final match, doing so with a ninth consecutive century, leading him to a confrontation with Quinn Bartlett in the second semi-final.

In the second semi-final, it started off close, with both players maxing out in the first three rounds. But Ed then scored 27 unanswered points with spots like HERNIAS in Round 4 and PAEANS in Round 7, which he only grew with BASINET in Round 12 to confirm his victory before the last numbers game. A fiendish conundrum flummoxed both players, with Ed incorrectly guessing megalator ☓ instead of GREMOLATA, but it mattered not, as he won with his tenth century, maxed 12 rounds, and set up a grandstand final against Tom Stevenson the next day.

In the final, both players started level. But, Stevenson eventually established a commanding 33-point lead with spots like RODENTIAL and UNTIMELY. However, later in the game, Ed became the first player to beat Tom on a letters round with a spot of IDEOGRAPH for nine, which also brought him back to close distance of Stevenson. Unfortunately, after that, Byrne could not close the gap any further, and Tom's victory was certified before the final round. During the conundrum, Byrne incorrectly buzzed in, while Stevenson correctly solved it with under half a second to spare to win the series, while Byrne took the runner-up spot. Byrne obtained an overall total of 1,272 points in his Series 86 run. With his earlier run, his overall total is 1,438 points.

Byrne came back in January 2023 to take part in Championship of Champions XVI where he faced Series 84 champion Ahmed Mohamed. Mohamed immediately raced into a 24-point lead, with sanatives ☓ and rodeoes ☓ being the disallowed offerings from Byrne contributing to that gap. That lead only continued to grow throughout the game, but Byrne was able to sign off his CD appearances in style with a complex solution to a final 4-Large numbers round. He also gained the last word against Ahmed by unravelling ONSCREENI to RECENSION to be the first person to solve a conundrum in the competition.

In 2015, he organised and co-hosted the first Countdown in Dublin. In 2017, Byrne won his first Co-event, defeating James Robinson in the COLIN XIII: The Hangover grand final.

In 2016, he participated in the Irish Open Scrabble tournament.