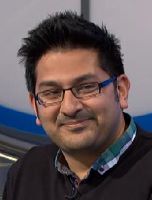 Bobby Banerjee was a finalist in Series 70.

Banerjee made his debut in the first episode of Series 70, defeating holdover champion Rod Chatfield. He won five more games, including one century, before losing to apterite Ciarán Crawley. As number 6 seed, he qualified for the finals, but lost to eventual runner up Andy Naylor.

He returned to the show at the end of 2014, to face-off against Bobby Johnson in a special episode entitled "Battle of the Bobbys".