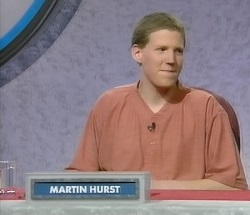 Martin Hurst was an octochamp in and the champion of Series 75 who made his début in Series 35, and a participant in Championship of Champions XV. He is also an Apterite.

Hurst first appeared as a 17-year-old in 1997, losing to quarter-finalist Robert Jones. He didn't watch the show again regularly for over 18 years and after a few months of casual viewing, he re-applied as a contestant in March 2016.

Hurst returned to Countdown in August 2016. On his "second début", he recovered from a disastrous start after scoring zero points in his first three letters rounds to beat Natalie Matale by a score of 54 – 102, including getting the nine OLEANDERS. In his third heat game of his octochamp run, he reduced Arnold Solomon to the second-lowest recorded score in the 15-round era of 7 – as well as joining a select club of Countdowners to have won a televised game by more than 100 points – before scoring the series high of 130 in his fourth game. In his fifth game, he was level with Simon Cookson before the conundrum, but it was Hurst who unravelled VILASINGH first to win by a score of 83 – 73 in a game with only 110 points available. He ran off three more victories to become an octochamp with 830 points and five centuries, and retained the number 1 seed position for the finals.

In the finals, Hurst achieved two more centuries to comfortably defeat both Tom Stephens in the quarter-finals and Andrew Fenton in the semi-finals. In the Grand Final, he and his opponent Andrew Macleod matched each other in the first eight rounds until Hurst won the third numbers game, where he chose his specialist 6 small. Macleod then played two back-to-back invalid words and, after the 13th round, Hurst built an unassailable lead and became the Series 75 Champion.

Hurst returned for the Championship of Champions XV in January 2019, facing fellow Apterite and series champion Tom Chafer-Cook in the sixth game of the preliminary round. Both players put in a strong effort with the nine-letter words ROYALISED and ELASIPODS, but a numbers mistake for Hurst and a few winning letters declarations by Chafer-Cook meant that the latter took the game 129 – 89.

Prior to his 2016 TV appearance, Hurst made his Co-event debut at Countdown in St Albans 2016. He also attended COLON 2017, finishing in 8th.