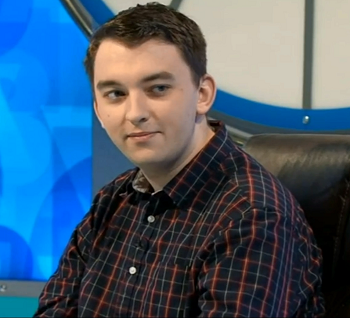 James Slater was an octochamp in Series 76. He is also an Apterite.

Despite not scoring a century, he qualified to return at the end of June for the Series 76 finals, becoming the first #8 seed to be an octochamp since Brenda Jolley in Series 47. Here, he was bested by #1-ranked Stephen Read, though he did manage to take Read to a crucial margin during the second "half" with his letters spots of CATHOUSE and CUISINE.

Retrieved from "https://wiki.apterous.org/James_Slater"
Categories: Contestants in Series 76 | Teapot owners | Octochamps of the 15 round era | Finalists