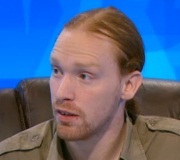 Sam McElhinney was a finalist in Series 68.

McElhinney won four games in his run and was the only Series 68 finalist whose entire heat run was played under the "original" 15-round format, which was replaced by its newer counterpart during the run of the player who defeated him, Andy Platt. McElhinney returned to face Joe McGonigle in the quarter-finals but was defeated in a game best remembered for a special guest surprising Rachel Riley on her 1,000th show.