From Countdown
(Redirected from Letters round)
Jump to:navigation, search 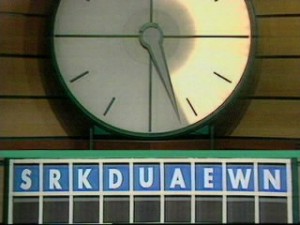 Example of a letters game.

A letters round is one of the ten rounds during a 15 round game in which the contestant chooses 9 letters by selecting either a vowel or a consonant until there is a total of 9 letters. The player can choose the letters in any order, but the selection must include at least 4 consonants and 3 vowels, hence there are only three valid choices in modern Countdown: 3 vowels, 6 consonants; 4 vowels, 5 consonants; and 5 vowels, 4 consonants.

When the show was first broadcast, and for a number of years, contestants could choose as many vowels and consonants as they liked, which often led to poor selections where only four- and five-letter words were available. Since Series 30, at least three vowels and at least four consonants must be chosen; if a contestant exceeds either maximum, their selection is overruled.

A player scores points on a letters game by writing down a valid word within the 30 seconds. This word must not be a proper noun nor an abbreviation, and must be listed in bold in either the Premium version of Oxford Dictionaries Online or the free version, Lexico (although sensible plurals or inflections are also allowed even if unspecified). Players can use each letter only as many times as it appears in the selection. For example, from the selection EEEECDLST, a player could offer SELECTED, using three of the four available E's. Words score 1 point per letter, except for nine-letter words which are worth 18.

Based on the pool of letters used in Series 66 (typical of most recent series), and disregarding the ordering of the letters, there are a total of 9,719,199 different possible letters games. Among all possible nine-letter words that can be formed from this pool, WAKIZASHI is the least likely to be available. Letters can often be more useful than at first glance, with many unusual beginnings and endings.

Countdown does not allow all nouns to have a plural form. In particular, a mass noun is a noun that that does not logically have a plural, like GUNFIRE or HEALTH -- in standard English they would rarely be used in the plural. This system has been the cause of some controversy and confusion. Since the start of Series 49, the rules have been refined on the basis that some categories of mass nouns can become count nouns: for example, CONGEES was allowed in Series 58 because it was argued that one could ask for "two congees". Again this rule has been enforced with some inconsistency, and words like OPALINES and CARMINES have been allowed on some occasions and not others. Of course some nouns like FLOUR are mass nouns but can also be verbs, so that an S can be added to form the third person singular of the present tense, e.g. he flours the table.

If a plural form of a declared mass noun does not fall under any of these categories, the lexicographer checks the example sentences in ODO. If the plural is listed in multiple example sentences, then it is accepted.

The letters game has caused several controversies over the years. As well as the mass noun rules which make it a "subjective" process to decide if a word listed as a mass noun can be pluralised, there are other issues. Some words ending in Y preceded by a consonant don't specify the -IES ending, for example NAILERY does not specify that NAILERIES is the correct plural, so under the official rules, NAILERYS ought to be accepted. Another example is one-syllable adjectives and their comparatives. For example PRONER and PRONEST and MAINER and MAINEST should be allowed because PRONE and MAIN are listed as adjectives. Words like MAIN which contain diphthongs or triphthongs also pose problems, relating to whether they are one or two-syllable words. Finally in Series 59 Dictionary Corner said that FUNNEST would not be allowed. In a similar incident, John Britton had RIGHTEST disallowed in a game in Series 50. He lost narrowly and would have won had it been allowed, but Damian Eadie decided that it should have been allowed, so he was invited back a few months later to start a new run.

Des chiffres et des lettres also uses letters games, but there are no tiles. Letters are generated by a computer, and contestants take it in turns to select one letter at a time, so one contestant selects 5 of the letters and the other 4. The Spanish version also uses this system.