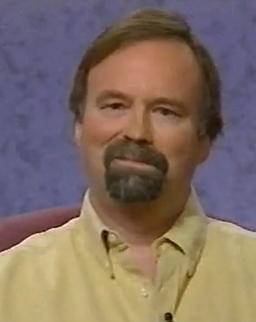 Dag Griffiths during his debut.

Dag Griffiths was the runner-up of Series 35.

A 55-year old retired school teacher originally from Cheshire, his unusual name came from his initials – David Arthur Griffiths. Griffiths beat five-time winner Stuart Barker in his first appearance, and racked up a further seven wins to become an octochamp and #1 seed for the final stages without facing a crucial conundrum in any of his eight games.

He beat Sue Henning in the quarter-final in a low-scoring game in which he faced his first crcual conundrum, emerging triumphant after neither player was able to spot the Conundrum, and then came from behind on the Conundrum to defeat Amy Godel in the semi-final, but lost the final to Pete Cashmore after Pete unscrambled the crucial conundrum. Griffiths returned for Championship of Champions IX, but was beaten in the first round by Bhavin Manek.

Griffiths would return to the Countdown studios one more time to record a special game, facing Pete Cashmore once again in a rematch of their grand-final, where this time he came away victorious.

Griffiths has also been a series champion on Countdown's former sister show Fifteen to One (Series 29 – 2000) and has come closer than anyone else to "doing the double" of winning both. He later appeared on the new version of the show in October 2014, however, he was beaten on this occasion by fellow former Countdown contestant Jon Stitcher.