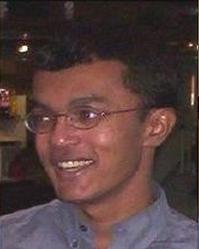 Harshan Lamabadusuriya (stylised on his nameplate as Harshan L'Suriya) was the runner-up of Series 34 and a quarter-finalist in Championship of Champions IX. He was an A-level student at Steyning Grammar School in West Sussex.

Lamabadusuriya made his debut in the first heat game of the series, comfortably beating Bob Edwards 55 – 44, and thus became the first new champion of the show following the Supreme Championship. Lamabadusuriya won another two games without facing a crucial conundrum before losing at the hands of Paul Wells.

Lamabadusuriya returned for the finals as No. 5 seed. He beat Peter Sampson in the quarter-final with a score of 72 – the highest of the series – following a commanding performance, and then pulled off a minor upset by beating No. 1 seed James Martin 48 – 31 in the semi-final the very next day, with the outcome already decided before the conundrum. In the final against Huw Morgan, however, Lamabadusuriya suffered a dramatic loss of form, struggling for points in the early rounds, and was ultimately beaten 79 – 65 despite staging a minor comeback towards the end. Notably, Lamabadusuriya admitted at the presentation of the dictionaries that it was Morgan narrowly beating him to the buzzer on the first conundrum that really did the damage, as this put Morgan 24 points ahead, by 47 – 23, at half time, effectively leaving Lamabadusuriya no way back; however, had Lamabadusuriya got to the buzzer first, the final result would in fact have eventually gone in his favour by 75 – 69.

Lamabadusuriya returned for Championship of Champions IX, beating Kate Surtees in the first round before losing to Pete Cashmore in the quarter-final.

Lamabadusuriya is also a Scrabble Grandmaster and, in March 2017, he broke a short-standing ABSP record for the highest score in one move: 329 for the word KREUZERS, which was later broken by Piotr Andronowski's 347-pointer ADEQUACY in September 2017. Lamabadusuriya is the 2003 National Scrabble Champion and finished runner-up in the 2017 World Scrabble Championship, where he lost the final 3 – 0 to Australian David Eldar.

Lamabadusuriya returned to Countdown for a special episode against fellow Scrabble Grandmaster Brett Smitheram which he won 101 – 87.