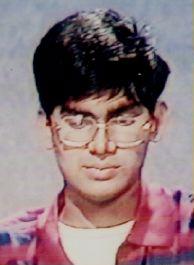 Allan Saldanha during the Supreme Championship.

Allan Saldanha was an octochamp in and the runner-up of Series 15, as well as the runner-up of the Supreme Championship. He is one of the most well-known Countdown contestants of all time, and also among the greatest players to never win a series. He was deemed a prodigy after first appearing as a ten-year-old boy. Including his special episodes and Countdown Masters match, Saldanha has competed in 21 games of Countdown.

Upon his début appearance in 1988, Saldanha was a schoolboy from London aged just ten years old. In his first game against Bridgette Lagden, he quickly amassed a 19 point lead and won by a score of 57 – 28. The six-letter word TOGGLE gave opponent Billy Wright an early lead in Saldanha's second heat game, but the schoolboy regained the advantage in the very next round and won by 61 points to 26. Saldanha's third heat game was similarly dominant; he scored in 8 out of 9 rounds and won 57 – 26. He defeated Margaret Elliot by 65 points to 23, and won his fifth game against Antony Stafford with a total of 60 points – he had actually scored 66 but his offering of CLOAKS was erroneously not added to his cumulative total. In his next game, he played Katy Green and amassed 81 points out of a possible 84, including 18 for the nine BARITONES. Nick Wilkes forced Saldanha to his first crucial conundrum in his penultimate heat, but Saldanha unravelled GUNGIERHN in 2¾ seconds to take the match. A score of 54 – 40 against Danny Morris gave Saldanha an octochamp total of 490 points, and he qualified for the series finals as #1 seed.

He briefly fell behind in his quarter-final against Paul Walker after his opponent spotted MOLEST. Saldanha regained the advantage with MOLARS in round 6 and GAITERS in round 7 and won 50 – 37. In his semi-final versus Peter Pryer, Saldanha gained an early lead with ANTIGEN but then had morales ☓ and prones ☓ disallowed in consecutive letters rounds. Pryer beat him to the conundrum LATINMANG, but overall he had been unable to capitalise on Saldanha's mistakes and it was the youngster who qualified for the series final against Dick Green.

The final proved to be one of the most controversial games in Countdown history. The six-letter word CONGAS gave Green the lead in round 2, before the eight-letter word STODGIER enabled Saldanha to take a slim lead in round 5. TIARA gave Green a slight advantage in round 8 which he retained until the penultimate letters game. Trailing by three points, Saldanha risked the word YOLKED, which was incorrectly disallowed by lexicographer Catherine Clarke. The game ended 70 – 81 to Green and, whilst Saldanha would still have lost the game had YOLKED it been allowed, it was felt that the wrongful dismissal of this word had had a psychological effect on the young man going into the conundrum behind rather than ahead of his opponent. Then-producer John Meade acknowledged the controversy and bought Saldanha a complete set of the Oxford English Dictionary, identical to the prize awarded to Green.

Saldanha returned to Countdown for two special episodes to celebrate the programme's longevity: he defeated fellow prodigy Tim Morrissey to celebrate the '1000th' episode, and beat Gareth Williams in the '1500th' episode. He played in a rematch of sorts against Morrissey in the Countdown Masters, winning 83 – 100 on the crucial conundrum ROYDANCES.

Saldanha played in Championship of Champions IV in January 1989, but was knocked out in the first round by Nita Marr. She had gained a 23 point advantage within the first three rounds, in part due to the nine-letter word ASPERSING, but Saldanha fought back to take the game to a crucial conundrum. Neither contestant solved it within the 30 seconds, and Marr won 45 – 53.

In 1996, the then 18-year-old Saldanha made his final competitive appearance on Countdown in the Supreme Championship. Playing in Group E, he beat Michael Wareham comfortably with a final score of 20 – 69, before crushing Darryl Francis by 83 points to 24, equalling Stephen Balment's record for the highest 9 round score. In the group final against David Trace, Saldanha had betime ☓ and misrating ☓ disallowed, but two perfect numbers solutions helped him to win 34 – 45.

In the series quarter-final, Saldanha achieved a max game against Joyce Cansfield. Only the conundrum prevented him from equalling this feat in his semi-final, played against Tim Morrissey in their third Countdown encounter. This victory gave Saldanha a place in the tournament final against Harvey Freeman, the champion of Series 10 and Championship of Champions III. Saldanha made a poor start, refusing himself CREOSOTED which allowed Freeman to take an 18 point lead after the first round. Saldanha narrowed the gap when Freeman had amative ☓ disallowed. The contestants scored evenly in the next four rounds, with neither solving the conundrum in round 7. Round 8 saw Freeman go even further in front with LUGHOLES, and after a seven each, Freeman beat Saldanha again on the numbers game. Thereafter, Saldanha spotted CONACRE, solved the final numbers game and unscrambled the conundrum PASTURERS to lose by just three points, having trailed by 30 earlier in the game.

Saldanha would also make a cameo appearance before his brother Richard Saldanha's special episode against Kate Ogilvie, recorded in 2002.

Despite not winning a series, Saldanha remains the youngest ever UK National Scrabble Champion to date, having won in 1993 at the age of 15. Although he no longer plays Scrabble, he is still keen on crosswords, having participated in The Times Crossword Championship Finals in 2019.

He is currently working as an audit manager, and returned to the Countdown world in 2020 when he appeared as the guest in the unofficial web series ZoomDown.