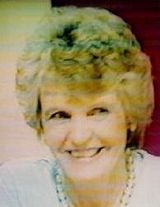 Marr in front of the purple, pink and white striped set in Episode S17.

Nita Marr (born 28 December 1943, the same day as Richard Whiteley) was a contestant, and semi-finalist, of Series 13. She came from Longniddry and after defeating Mike Whiteoak in her first heat game, she won a further six before losing her eighth to Mark Preston. Nonetheless, she returned for the series finals as #1 seed, beating Cath Powell in the quarter-finals before losing to eventual champion Hilary Hopper in the semi-finals. Marr returned for Championship of Champions IV, causing a huge upset by beating Allan Saldanha in the quarter-final, but losing to eventual winner Nic Brown in the semi-final. In that game, Marr correctly guessed that the conundrum DECKCLOUD unscrambled to CUCKOLDED, but was unsure as to whether her guess was a valid word and so did not buzz. Had she buzzed, Marr would have won the game and qualified for the grand final.

Marr returned once again to the Countdown studios for the Supreme Championship in 1996, but lost in the first round to Irish wunderkind Tim Morrissey on the crucial conundrum BOOKSHELF. She also participated in both series of Countdown Masters, winning the first ever match against John Wallace 114 – 69, and losing 99 – 81 in the second series against Jenny Haldane. Nita also recorded a special game in 2002, broadcast in 2004, pitting her against The Countdown Page author Mike Brown, which she lost 113 – 70.

Marr's mother Ella Bernard appeared as a contestant in 1992.

Marr is perhaps best known in Countdown circles as the founder and current chairman of the Edinburgh Countdown Club, which has been running for two decades. She also authored a chapter of Countdown: Spreading The Word, detailing her experiences both on the show and in setting up the club. On the programme broadcast on 11 November 2009, members of the Edinburgh Countdown Club were pointed out in the audience by Jeff Stelling. Marr was the uncredited person who solved the conundrum PUREEDRAT after it defeated both contestants.

Marr has appeared on many other game shows, including Blankety Blank and Fifteen to One.

In November 2012, she along with Richard Priest and Mike Brown co-organised COEDI, the first Countdown in Edinburgh tournament, and she also participated in it.