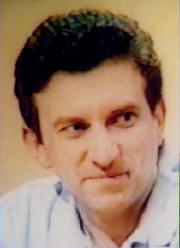 Mike Brown was a finalist in Series 48.

An IT Projects Leader from King's Lynn, Norfolk, he beat Joyce Dunkley in his first appearance with 112 points, following that up with 112 points again against David Cottee. He dipped below 100 in his next two games, but got 107 against Trish Staples in his 5th game. He lost his sixth game narrowly to Neil Evans by just 13 points. Despite this he averaged 97.33 points per game. He returned to the series finals as #8 seed and faced the runaway #1 seed Julian Fell. He lost the game 125 – 67. Fell scored in every round.

Brown also recorded a special game in 2002 (broadcast in 2004), pitting him against The Edinburgh Countdown Club co-founder Nita Marr, which he won 113 – 70.

Away from the show itself, Brown runs The Countdown Page which is the largest and oldest of all the major Countdown sites on the net. He's also a moderator on the C4countdown group.

In November 2012, he along with Nita Marr and Richard Priest co-organised COEDI, the first Countdown in Edinburgh tournament, and he also participated in it. Since 2015, Brown has organised and been host of Countdown in Kings Lynn, in 2018 this was replaced by Countdown in Cambridge.

He is also a regular at unofficial Countdown tournaments, including